The 5 Ws of Nicotine Testing 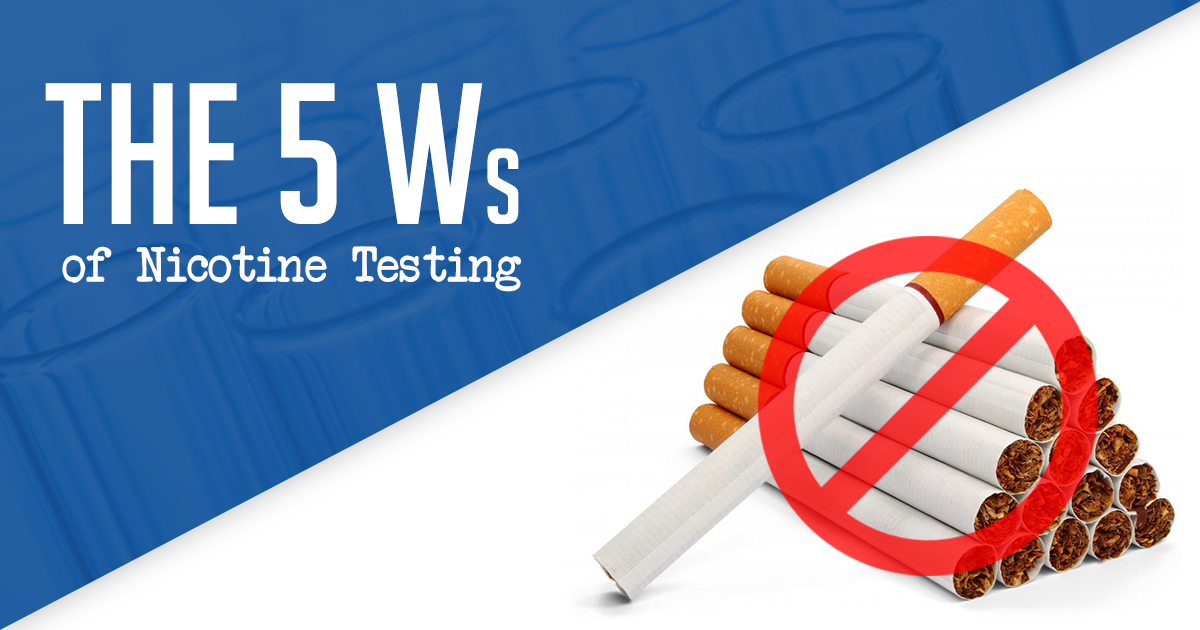 Take a stroll through your local chain drug store & you’ll see all kinds of home drug testing kits: opiates, marijuana, benzodiazepines, and now we have home kits for nicotine testing. Why on earth is nicotine lumped in with these other “more harmful” drugs, and why are so many companies testing for it now? The simple answer is that tobacco kills, and many people aren’t okay with that. The less-simple answer is lengthy, so buckle up. We’re going to use the 5 Ws to break this down.

Who can be tested for nicotine? Anyone, but typically, employees of companies with a nicotine ban are most likely to be tested. Children of concerned parents may also be “at risk” for nicotine testing.

Who might be requesting the testing? Generally, employers who have a policy against smoking while employed by them, and sometimes parents who suspect illicit activity from their kiddos.  Often, healthcare environments like hospitals and clinics will have policies against employees smoking, but any employer can deem tobacco products a hard stop for employment. Nicotine testing is a convenient way to enforce those policies.

Who can perform the testing? Anyone with the right equipment and training. The drug store tests are okay, but generally can’t be trusted to give an accurate reading. Collection sites and laboratories generally have much more accurate devices and equipment (like your team at ProHealth!).

What is nicotine testing? It’s simply testing your blood, urine, saliva, or hair for traces of nicotine. If you’re over the limit, you’re considered a positive test result. Laboratories generally send lab results to whomever requested them and allow that entity to handle it from there.

When can someone be tested for nicotine? Anytime! Just like random drug testing, employers or whomever wants the testing done can request nicotine testing anytime they want to, within the guidelines of your contract, of course.

When does nicotine stop showing up in my system? Usually nicotine lasts 10 days in your blood, 4 days in your saliva, several weeks in your urine, and several months in your hair follicles. This will of course vary depending on how often you consume nicotine and how much of it you consume at a time.

Where does testing occur? In laboratories, in doctor’s offices, at job sites, or even at home if you opt to go that route. Often, employers require legitimate lab results for this kind of testing.

Why test for nicotine anyway? Tobacco use is a leading cause of death in the US. Nicotine is found in tobacco products, and affects your “happy & sad chemicals” in your brain. People who use nicotine can be less dependable workers, less satisfied with their lives, and more of a liability for insurance & healthcare purposes. Smokers are one of the highest users of health insurance benefits. Therefore, many employers now require their employees to abstain from using tobacco products while working for them. In order to enforce these rules, we now have nicotine testing.

How does nicotine testing work? Depending on the type of test used, we can test hair follicles, saliva, urine, and blood for levels of cotinine, which is a metabolite (side effect of sorts) of nicotine. The reason we test for cotinine is because it hangs around longer than nicotine and is easier to use for tobacco use prevention purposes. Typically, one cigarette releases about 1mg of nicotine into the body. This nicotine proceeds to release or produce other chemicals like cotinine, anabasine, and nornicotine. “Nicotine” testing is actually a scan of sorts for all 4 of these chemicals in the body. Based upon the amounts of each chemical found in the test site, a positive or negative result will be declared. Certain levels of each chemical are considered “passive use” levels, so if you don’t smoke, but you live with Great Aunt Sally who smokes like a forest fire, don’t fret. We can tell.

If you’re an employer, a concerned parent, or just curious about your own nicotine levels because you live with Great Aunt Sally and are concerned about second hand smoke related diseases, ProHealth can help you out. Visit our website, call us, or come on by to get more information or to schedule your test today!