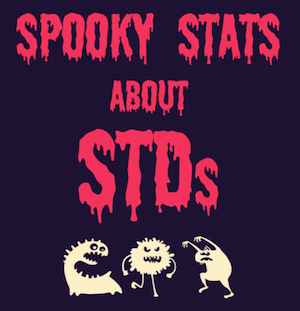 October is here again, and it’s time for all things spooky to come back! All around towns in America, we’re seeing ghosts, witches, and spider webs in abundance. There’s a silent spook, however, that is present during all seasons and much more difficult to spot. That’s right. I’m talking about STDs. I hope you’re ready for some freaky facts, because we’re about to take this taboo subject and hopefully make it a little less awkward for everyone.

First, let’s talk about statistics. It’s no secret that our country is reporting its HIGHEST EVER STD numbers. Just three years ago, there were 2 million reported cases of chlamydia, gonorrhea, and syphilis alone. That’s not even including HIV and herpes! Factor in that most STDs have a phase during which they don’t exhibit symptoms, and that even if they do, a lot of people are too embarrassed or stubborn to seek treatment or testing so they go unreported, and it’s clear that we have a real problem on our hands.

Now let’s talk about some of the most common STDs we’ve got running around. HPV is the most popular poltergeist in the STD world. It’s actually WAY more common than we as the general population know. As a matter of fact, almost every sexually active person will have HPV at some point in their lives. You didn’t misread that. The kicker with HPV is that it rarely shows any symptoms. Generally, it causes no harm and your body is almost always able to fight it on its own. Almost. If HPV does rear its ugly head, one may experience a variety of different problems, including genital warts, infections in the mouth and throat, and cancer in severe cases. Prevention options include 3 types of vaccinations: Cevarix, Gardasil, and Gardasil-9.

Next up on our list is chlamydia – the most commonly reported STD in the country. Symptoms can include odd discharge from the genital areas and/or pain or burning during urination. Chlamydia is very treatable with antibiotics, but patients should always be retested within 3 months to make sure there is no recurrence of the infection.

Following chlamydia at second place is gonorrhea. With an average 470,000 reported cases annually, gonorrhea is a strong contender in the STD game, and is often part of the chlamydia package. The two have similar symptoms, and gonorrhea is also easily treated with antibiotics.

Syphilis is our third place competitor, and is a little bit more of a complicated beast. It has four stages, and the first two stages are the most commonly reported. This makes sense, because the symptoms during these stages include sores on/in genitals, mouth, and anus and body rashes. People are much less likely to ignore these uncomfortable symptoms than the manifestation that occur in the third and fourth stages. Unfortunately, after stage two, the symptoms of syphilis disappear until the infection progresses into the fourth and final stage, which causes organ damage, nerve damage, and even brain deficiencies. With 28,000 reported cases of the first and second stages, syphilis is showing no signs of disappearing from the STD world. However, syphilis is easily treated with antibiotics, especially when caught early.

Lucky number 5 in this sinister countdown is herpes. Herpes itself is fairly commonly known, but less common is the knowledge that there are actually 2 different kinds of herpes. Typically, hearing “herpes” conjures up thoughts of genital blisters, but that’s only half true. The other half of the truth is that cold sores are also a type of herpes. Herpes simplex virus 2 causes genital herpes, and herpes simplex virus 1 causes cold sores. One of the most important facts about herpes is that it can be spread via skin-to-skin contact, so just using a condom may not be enough to prevent infection. Always know your partner, and if you don’t, get tested!

The next unlucky contender is trichomoniasis (trich). Trich is caused by tiny, microscopic parasites manifests in symptoms such as itching, burning, or sore/tender genitals, or abnormal genital discharge. Like most of the other STDs we’ve discussed, trich is easily treatable with antibiotics, but patients do need to be retested for recurrent infections in about 3 months.

Last but certainly not least, we have HIV/AIDS. HIV was first discovered in the 1950s, and its prevalence has done nothing but grow since then. Initially presumed a strictly sexually transmitted disease, we now know HIV/AIDS can be spread through any exchange of bodily fluids. To add insult to injury, the symptoms of HIV are fairly mild. One may experience flu-like symptoms, diarrhea, and/or weight loss. There is no cure, and HIV will eventually destroy the immune system, but with modern medications most patients live long, virtually normal lives.

How can I protect myself?

All STDs have negative symptoms, some mild, others quite severe. All STDs can also affect pregnancy, whether it be the mother, the child, or both. They are communicable through the blood stream, fluids, and breast milk. In pregnancy, they can result in birth defects, ectopic pregnancies, and infant death. That’s the bad news. The good news is that all of this is preventable! How, you ask? The answer is simple: practice safe sex, and get tested for STDs regularly. Have you been wanting to get tested but you’re uncomfortable with the idea or don’t know how? Don’t fret! ProHealth has got you covered! We offer a variety of STD testing options, and our main focus is YOUR comfort and privacy. All you have to do is stop by one of our locations or give us a call to start the simple process.

No amount of embarrassment is worth a child’s life, or your life, or even the agony of living your life wondering if you might be facing the long-term effects of an STD at some point. Why put yourself through that? Life is hard enough! Especially when help is just a phone call away. Click here to find a location near you.