Digging Up the Dirt on Tetanus Shots 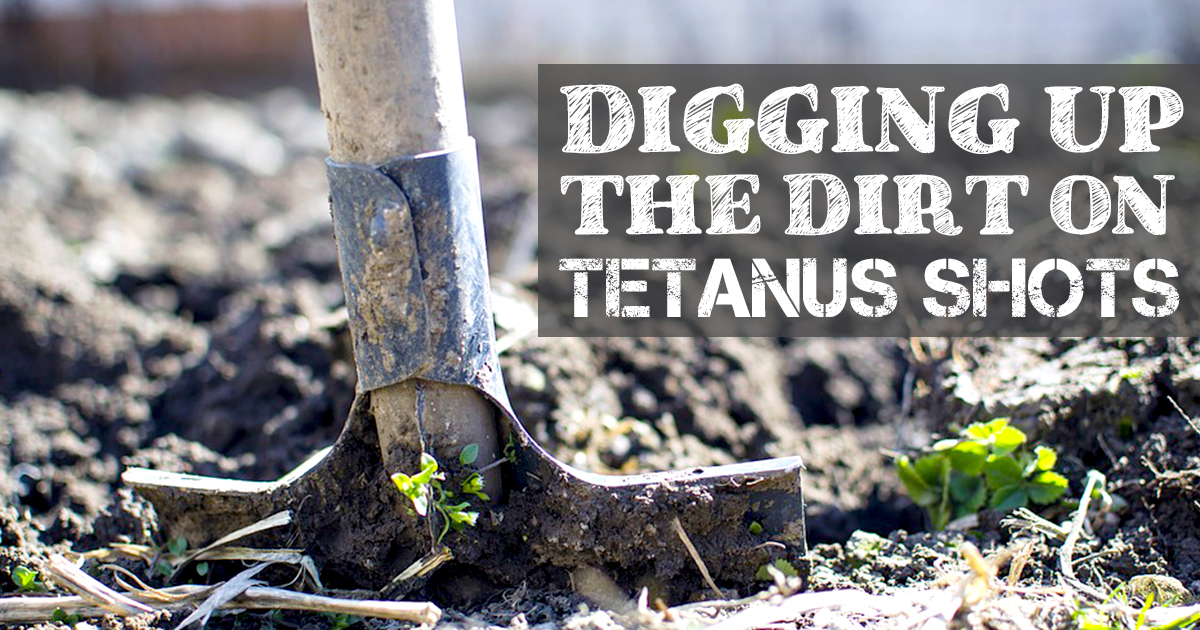 It’s a beautiful day and you want to plant some daisies or impatiens. You gather up your tools: gloves, hat, sunscreen, tetanus shot – hold the phone, tetanus shots? It’s true – rusty nails are not the only way to contract tetanus (lockjaw). Believe it or not, if you should get a (supposedly) simple scratch as you work in your garden it can open the door to very bad infection.

Even though tetanus is relatively rare in the United States (about 30 cases are reported each year with a 20% fatality rate) there were over 56,000 deaths worldwide due to tetanus in 2015. Nearly all of the cases in the U.S. involve adults who were not up to date with their booster shots or people who have never received the tetanus vaccine. According to the Center for Disease Control (USA), 33% of tetanus infections in the United States are caught while in the garden and more than half of all tetanus cases are found in people over 65.

How it Does Damage

The tetanus bacterial spores enter the body through a scratch, cut or deep wound. Ironically, a tetanus infection is far more likely to occur from a small cut versus a major wound. However, it’s not the bacteria that cause the damage, but the neurotoxin they produce. This particular neurotoxin, tetanospasmin, is second only to botulism (food poisoning caused by improperly sterilized canned meats and other preserved foods) in its’ toxicity.

The average incubation period for tetanus is seven to ten days. That being said, signs of tetanus can take as little as three days or as long as 21 days to manifest – the longer it takes to present the harder it is to diagnosis. As mentioned earlier, tetanus is pretty rare in the United States – several doctors have never even seen a case, which can lead to misdiagnosis.

A 61 year old British woman fell into a bush in her yard and got a severe cut on her face. She went to the emergency room. Her wound was treated. About a week later she went back to the doctor complaining of a stiff neck and difficulty swallowing. The doctor, not being familiar with tetanus (tetanus is also very rare in the United Kingdom) missed the signs and the poor lady died four weeks later.

What are the symptoms?

Generalized tetanus (the most common type) presents itself with stiff jaw, difficulty swallowing, very painful spasms in the arms, neck, legs and stomach.  Oddly these spasms can be triggered by a loud noise, physical touch, light or even a draft. Sometimes the symptoms can be subtle. In recent research conducted by the Mayo Clinic excessive sweating, accelerated heart rate, high fever and increased blood pressure could also be signs of tetanus. On the plus side, tetanus is not contagious.

Is there a cure?

There really isn’t a ‘cure’ for tetanus. The doctor may give you a tetanus antitoxin. However this will only neutralize toxins that have not yet bonded to nerve tissue. Your doctor will treat the symptoms with antibiotics to kill the bacteria, sedatives and powerful muscle relaxers to help control the muscle spasms to prevent bone breakage. The human body has twenty-five muscles just in the back alone. With the intense muscle spasms brought on by the neurotoxins the back can arch backwards and lock which can cause the spine to break.

Long story short, until the body is able to regenerate new nerve endings that can regain control over muscle function, one could be in unimaginable pain for several weeks and recovery may take months. That’s if one lives.

It’s crazy to think that a simple immunization can prevent incredible pain and even death isn’t it? ProHealth offers the Tdap vaccine which protects you from not only tetanus but also diphtheria AND pertussis (whooping cough). By the way, did you know if you have a newborn baby in the family, it is STONGLY recommended that anyone who wishes to hold the baby MUST be vaccinated against whooping cough (pertussis)? The Tdap has you covered.

So, before you dig in your flower beds give your doctor a call to verify when your last tetanus shot was. If it has been over ten years get vaccinated. It also couldn’t hurt to wear good gardening gloves (preferably ‘poke’ proof) and protective footwear. If you have a wound, even a small scratch – cover it before you begin to dig.