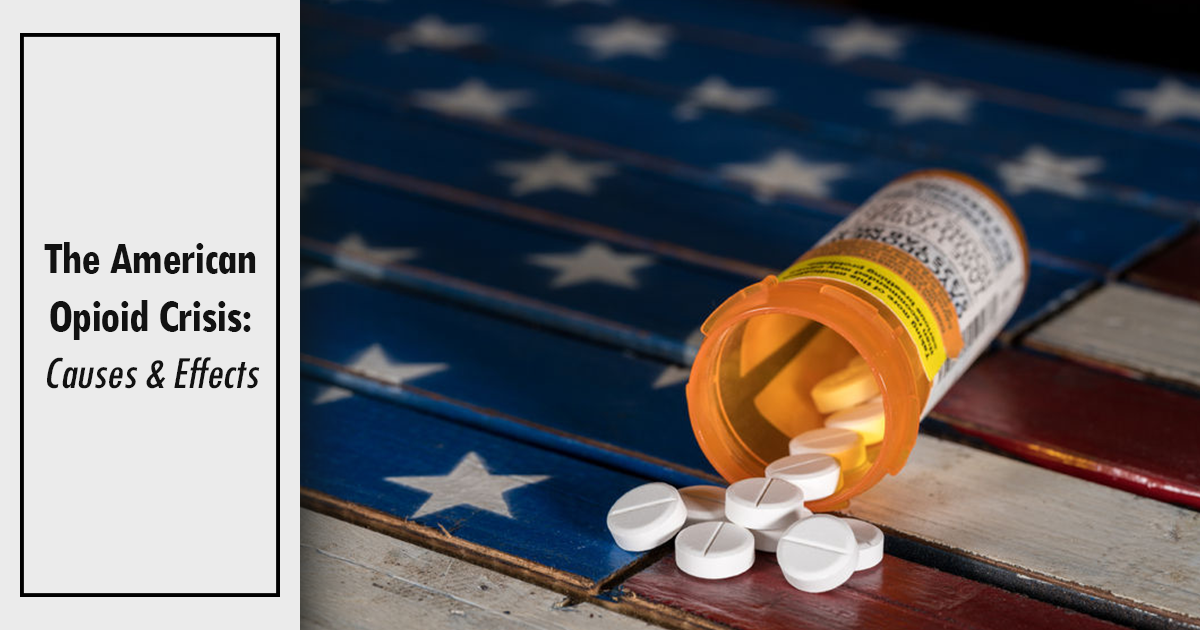 “Opioid crisis”: Two words every American has probably heard many times lately. Our country is in the throes of a huge drug problem, and it seems to be one of the media’s favorite things to report on. But what exactly is happening? How did we get here, and can we fix it? Let’s start with how we got here.

Oxycodone is the main ingredient that OxyContin comes from. Oxycodone itself originated in Germany in 1916. It was created in an attempt to find something better than heroin, cocaine, and morphine to treat pain. This drug is now a major contender in America’s drug crisis and is one of the most widely prescribed and abused drugs of all time. Purdue Pharma first began manufacturing OxyContin in the US in 1996 and within a few short years, it was a favorite in the narcotic playing field. It became so readily available that many patients found they kept extra pills lying around, and then they discovered they could sell the extras for a huge profit. Thus began the oxycodone selling business.

Oxycodone was definitely not the first drug to be sold illegally in the US, but it has definitely opened many of the doors that ushered us into the crisis we find ourselves in today. Any drug that contains codeine, morphine, or any derivative of the two is generally a controlled substance, and carries the addictive qualities of opiates. One of the main ways people get addicted to opiates & similar drugs starts with a legitimate need. They hurt their back at work, they’re in a car accident, they have surgery, or some other incident occurs that causes them to need some temporary pain medication.

The problem starts when they continue filling & taking the medication after the injury/surgery/whatever the case may be has healed because doctors and other prescribers, pharmacy personnel, and the patient themselves don’t do their due diligence. These drugs are frequently overprescribed for a variety of reasons, which makes it incredibly easy for an innocent need for pain meds to turn into a life changing (sometimes life ending) addiction.

An Unending Flow of Drug Addictions

Over the last few years, we have shifted from occasional reports of drug-related deaths to an unending flow of drug addictions, drug-related homicides, suicides, and accidental overdoses, and the effects of this crisis on our nation’s children. Specifically in Florida, approximately 3900 deaths were attributed to opioid addiction in 2015, and 5,725 opioid related deaths were recorded in 2016. Since then the numbers have SLIGHTLY declined, but our state government is now tackling this problem head on. Recently Gov. Rick Scott signed a bill into law that will limit opioid prescription fills to seven days per fill.

The idea of this is that patients will receive fewer pills at a time, therefore build up less excess medication, and also be monitored by pharmacy personnel and doctors much more frequently. Basically, more face time with healthcare professionals should cut down on addiction risks. Another recent step toward eliminating this crisis is the allocation of approximately 1.2 million dollars to help the panhandle fight the epidemic. Though this is a good start, and sounds like a lot of money, most healthcare professionals will agree it’s simply not enough. Hence, Gov. Scott & the Florida government are constantly fighting for more funds to help fix the Floridian opioid crisis specifically.

When The Problem Hits Home

Locally in NWFL, we also have many facilities committed to assisting those caught in the opioid trap. Lakeview Center is one such center. They have services dedicated to all types of addictions and mental illnesses, and assist many other local foundations with treating opiate-addicted patients. Recently in DeFuniak Springs, the Chautauqua Women & Children’s center opened, and will be focused on treating pregnant addicts and their children who are born addicted to drugs and alcohol. There are many other facilities and organizations in the panhandle who are trying their hardest to get help sent where it’s needed, but there is also no shortage of illegal, addictive drugs or people to sell them on the streets.

Other than impacting individuals & their families, often tragically, this crisis is also wreaking havoc on employers/employees. Opiates affect addicts in many ways that inhibit their ability to perform jobs appropriately, and often this leads to terminations and burned bridges between employers and employees. For this reason, drug testing, specifically for opiates, is now a crucial part of the hiring process. If you’re in the business of hiring people, and need to implement a drug testing process for new hires, ProHealth can help you with that.

We offer  5-panel, 9-panel, 10-panel, and 12-panel tests (among others), plus DOT drug testing and HHS testing. These tests evaluate patients for the use of drugs such as propoxyphene, cocaine, marijuana, methaqualone, amphetamines, PCP (phencyclidine), methadone, benzodiazepines, opiates, and barbiturates. Put simply, we can test for a wide variety of substances that are vital for your hiring purposes. The two tests that are most highly recommended for coverage of opiate testing are the 10 & 12 panel tests. If you need to set up drug testing for your company, feel free to visit our website, give us a call, or come on in to one of our locations & get the process going.